We put the three top players, in terms of revenue within the social media industry, under a microscope. These companies are absolute behemoths and their stories can be made into full length feature films, something that was already done for Facebook. We'll look at the talent that works for the companies, compare their financial performance to the benchmarks we defined in the last section, discuss their operations procedures, and list some of their acquisitions along the way.

Just as a side note, according to Statista, the top three SNSs worldwide in terms of active users as of June 2014 are, in order, Facebook; QZone, a Chinese SNS; and Google+. From its website: LinkedIn is the world's largest professional network with 300 million members in over 200 countries and territories around the globe. Our mission is simple: connect the world's professionals to make them more productive and successful. When you join LinkedIn, you get access to people, jobs, news, updates, and insights that help you be great at what you do. LinkedIn started out in the living room of co-founder Reid Hoffman in 2002, and it officially launched on May 5, 2003. Jeff Weiner is the CEO, and the company's management team is made up of seasoned executives from companies like Yahoo!, Google, Microsoft, TiVo, PayPal, and Electronic Arts. LinkedIn is publicly held and has a diversified business model with revenues coming from member subscriptions, advertising sales, and talent solutions.

LinkedIn has over 5,700 employees working with the part of the executive staff discussed here. Headquartered in Mountain View, CA, it has offices in 27 US cities and around the world.

Jeff Weiner, Chief Executive Officer
Jeff Weiner is the CEO of LinkedIn, the world's largest and most powerful network of professionals. Jeff joined LinkedIn in December 2008, and under his leadership, LinkedIn has rapidly expanded its global platform to 23 languages and 27 offices around the world, grown its membership base from 33 million to more than 300 million members and increased its revenue to more than $1.5 billion in 2013. Before LinkedIn, Jeff was an executive-in-residence at Accel Partners and Greylock Partners, where he advised the firms' consumer technology portfolio companies and evaluated new investment opportunities.

Deep Nishar, Senior Vice President, Products and User Experience
Deep Nishar has more than 20 years' experience helping to build and grow successful software and Internet businesses. He joined LinkedIn in January 2009, and as the Senior Vice President of Products and User Experience, he is responsible for setting and executing the company's global product strategy. He also oversees product management, data analytics, online sales and customer operations, as well as the user experience and web design teams.

Pat Wadors, Vice President, Global Talent Organization
Pat Wadors joined LinkedIn in January 2013 to lead its world-class talent (HR) team. In addition to hiring, retaining and inspiring top talent, Pat is also responsible for all employee-related HR programs at LinkedIn, including compensation and benefits and performance management. She came to LinkedIn from Plantronics, where she was Senior Vice President of Human Resources, responsible for leading the company's facilities and human resources programs across its worldwide offices.

As of its 2014 Q2 filings, it have $3.72 billion in total assets, $2.87 billion of which are current, and $840.6 million in total liabilities, $736.2 million of which are current. The majority of its current assets are marketable securities, cash, and accounts receivable and more than half of its current liabilities consist of deferred revenue. This gives LinkedIn a book value, or shareholders equity, of $2.875 billion. By the end of June 2014, it had net revenue of $1 billion and total costs and expenses of $993.7 million. Even though it had $13 million income from operations, a $29.8 million provision for income taxes resulted in a net loss of $14.25 million. LinkedIn started 2014 with $803 million in cash and cash equivalents, but reached the end of June with $645 million.

Comparing LinkedIn to our benchmark, we see that it is performing worse with a -0.19% profit margin and a lower current ratio, but it appears to have a higher degree of leverage based on total debts to total assets. 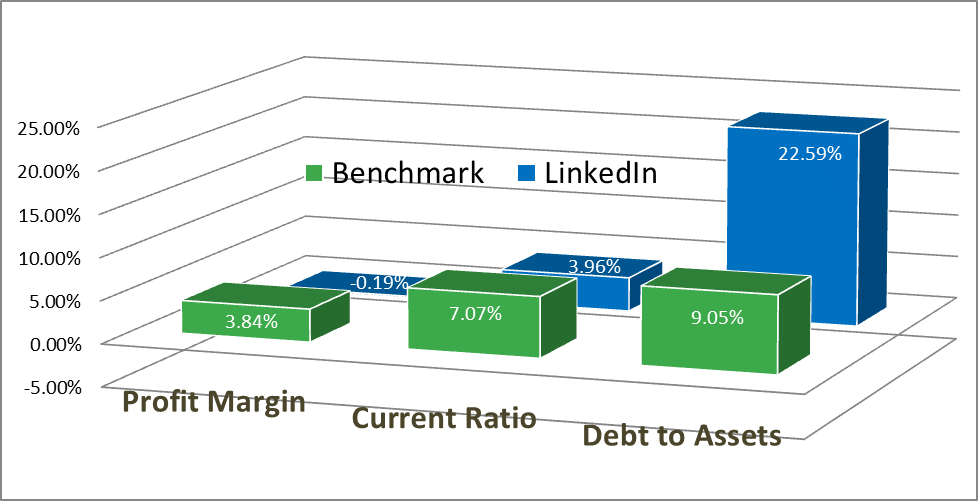 LinkedIn is publicly traded on the NYSE. As of the markets close on 8/4/14 LinkedIn had the following valuation:

As mentioned earlier, a negative EPS might be a cause for concern, and with a negative profit margin one would be understandably concerned. Furthermore, LinkedIn has been performing worse than both, the S&P and our social media industry benchmark throughout the timeline we're observing.

Regardless of the concerning issues pointed out, LinkedIn is one of the only companies in our benchmark that has been seeing positive numbers on the market in the week since its Q2 earnings release. This might be due to recent news about it focusing on growth with investments in its mobile platform and sales.

There are three main services offered by LinkedIn- Premium Subscriptions, Marketing Solutions, and Talent Solutions, which, respectively, made up 20%, 20%, and 60% of its 2014 Q2 revenues. Premium Subscriptions provides a feature set, more advanced than the free site, for finding and communicating with individuals. Marketing Solutions allows individuals and organizations to target LinkedIn's user-base for marketing purposes; this is its advertising platform. Talent Solutions allows organizations to post employment opportunities, find and communicate with potential hires. This site offers three products that are based on these services- Identity, which allows users to manage their profiles, job requirements, and social connectivity; Insight, which allows members to perform research, join relevant groups, and connect with industry professionals; and Everywhere, which allows LinkedIn's services to be used across platforms and devices.

LinkedIn offers their services across traditional and mobile devices using its website or proprietary applications. Taking a look at the LinkedIn website source code confirms that it is heavily dependent on javascript, as are most cutting edge sites with high traffic volume. The back-end likely consists of a blend of solutions, but we know it use Oracle's MySQL as their primary database solution. MySQL is typically deployed on Apache's application server software, which means it probably utilizes Unix or Linux servers. An April 2013 interview by Businessweek's Ashlee Vance with LinkedIn's senior VP of engineering, Kevin Scott, provides us with a bit of insight into how things run at LinkedIn. Particularly interesting is LinkedIn's goal of continuous development, a trending engineering approach with web companies, and the amount of testing performed, especially A/B, or multivariate testing. Cutting edge technology depends on proper measurements and adaptations, as well as the most productive and efficient development procedures.

This testing, in conjunction with other market research tactics, provides the basis for LinkedIn's long term operations strategies. This includes which services it should offer, at what prices, and how it should be delivered. But before a finger is lifted and dropped onto the keyboard, beginning the services development, a question is asked: do we build it or buy it? There are many factors that go into the build or buy consideration, such as engineering cost, insourcing vs. outsourcing, and time required. We don't know the specific criteria used by LinkedIn's staff to decide when to build vs. when and who to buy, but we can discuss some major acquisitions and, possibly, infer where they plan on taking operations next.

A complete list of LinkedIn's acquisitions can be found here. The two acquisitions in July 2014 stand out as they appear somewhat outside the scope of LinkedIn's current service offerings. Newsle is a social network feed aggregator; it combines social media from Facebook, LinkedIn, and other sources and delivers a filtered dataset. Bizo is a B2B digital marketing platform. Will LinkedIn simply try to expand its current news feed with Newsle or is there a broader plan, maybe to redefine how information is consumed? How can Bizo's solutions be offered to the millions of businesses on LinkedIn or, better yet, how can the idea of brand management be applied to all of LinkedIn's users? The possibilities for both of these acquisitions are vast.

LinkedIn serves a highly in-demand niche by providing a business oriented solution for social media. It successfully lock in their users by offering access to tools and networks that can't be matched. This makes it very difficult for new entrants to compete with LinkedIn or for substitutes to appear desirable. It has talented individuals working for them and is focused on the future in terms of services and market share. Its financials seem a bit rocky at this point in time, but that can change with the introduction of a new and highly accepted service or technology. Considering its latest acquisitions, we might be hearing such an introduction in the near future.